Our Church
​
The St. Joseph Community was founded by German Catholic immigrants who migrated to Florida from Minnesota.  In March 1883, Andrew Barthle visited the area and in June 1883 his older brother, Bernard A. Barthle, established the first permanent home.  Andrew settled across from Bernard in 1885.  Know first as the “Barthle settlement” it was soon renamed the “St. Joseph settlement” after the town in Minnesota from which they had emigrated.

By 1888, Charles Barthle, Andrew’s younger brother, and a number of other families, including the Blommels, Boettingers, Buttweilers, Fritzlers, Gerners, Nathes and Zierdens, had also joined the community.  In July 1888, these pioneer families acquire five (5) acres of land from the Plant Investment Company, upon which they erected a small frame building, called the Jubilee Chapel, to serve as a school and chapel.  On October 1, 1888, Father George Pilz, the Benedictine pastor of the parish in San Antonio, dedicated the building and celebrated the first Mass, naming the parish for the Sacred Heart of Jesus.
On the same day, the school was opened with the installation of the first teacher, Bernard A. Barthle.  In September 1889, the Benedictine Sisters of Holy Name Convent began teaching at St. Joseph School.  When a church building was constructed in 1892, the Jubilee Chapel continued to serve as the schoolhouse until 1918.
Because of a devastating freeze around the turn of the century, the pioneer families, who were farmers, could no longer support the school.  They then asked the county to assume financial responsibility for it.  Except for the years 1918-1921, the Benedictine sisters continued as the school’s teachers until it closed in 1981.

In 1918, the county purchased an acre of land next to the church property where it erected a one-room frame building to serve as the school.  A second room was added in 1924.  After St. Joseph Public School closed, the parish bought the building and property for Sacred Heart Daycare.

The original Sacred Heart Church was replaced in 1976, constructed as in pioneer years, by the St. Joseph community. 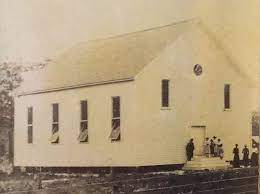