Benedictine Monks first came to Alabama from St. Vincent Archabbey in Latrobe, Pennsylvania, in the 1870s to serve the German-speaking Catholic communities. Most of the early monks were natives of Bavaria. The monks arrived in Cullman in the 1880s, and established St. Bernard Abbey on September 29, 1891. It was named in honor of St. Bernard of Clairvaux, the famous eleventh century French abbot and doctor of the church. The new community chose its location because of the area’s healthy climate, rapid growth, and access to the mail railroad.

In the same year as the Abbey’s founding, the monks established St. Bernard Preparatory School on the outskirts of the city – on the grounds of the monastery. The school was chartered by the State of Alabama in February 1893, and though primarily a college preparatory school, including middle school grades, St. Bernard regularly conferred bachelor’s degrees. 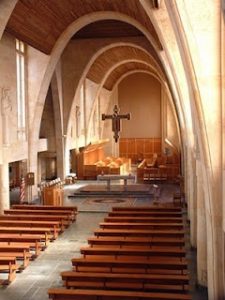