Built in 1889, this historic bank building located at St. Joseph, Missouri is a six-story, rectangular brick building designed in the Richardsonian Romanesque style with added Beaux-Arts detailing. The bank originally was created to provide service to the large number of German-speaking citizens in the region. In 1918, it was renamed the American National Bank. Later, it became First Federal Savings and Loan. It symbolizes the economic importance of German immigrants in the Midwest during the late 19th century.

It was added to the National Register of Historic Places in 1978. 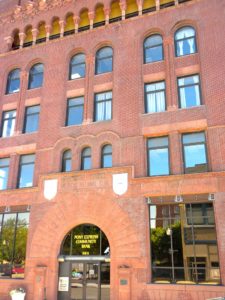