Kupfrian's Park was a recreational area in 19th and 20th century Pensacola developed by Conrad Kupfrian. Residents of the area, now more commonly called Kupfrian Park, have teamed up with the Escambia County Health Department to make use of the Protocol for Assessing Community Excellence in Environmental Health (PACE-EH) program in order to improve lighting, sidewalks, and drainage in the neighborhood.

Conrad Kupfrian was a Pensacolian businessman who founded the Pensacola Streetcar Company and introduced streetcars to Pensacola, in 1884. Kupfrian was also the proprietor of Kupfrian's Park.

A native of Germany, Kupfrian immigrated to America at age fourteen. After moving to Pensacola, he was apparently sent to St. Louis by his employer for career training, where he saw and was inspired by the city's horsecar system. Returning to Pensacola, he formed a partnership with John Pfeiffer and John Cosgrove, raising $50,000 in capital and persuading the City Council to pass an ordinance allowing steel tracks in the roadway. His first streetcars were horse-drawn, but he later converted to electric.

Kupfrian created an amusement park in what was then the northwestern part of the city, known as Kupfrian's Park, as a destination to complement the streetcar system after normal business hours.

Kupfrian's Park was roughly bordered by the following modern-day streets: North Pace Boulevard to the west, West Avery Street to the north, North J Street to the east, and West Blount Street to the south. Much of that land is now occupied by Pensacola Retirement Village. The pond that is still extant on the site was once in the infield of a half-mile dirt track used for horse racing, completed in 1874.

Kupfrian's Park was a very famous place in these early days and was used for horse races, fairs, and picnic grounds. Kupfrian's Park covered several acres and was Northwest of the City of Pensacola on the outskirts of the City. The grounds were covered with massive oak trees, excepting the race track which was a circle on the back of the grounds. Kuprian's Park was very popular in the early development of the City and old-timers now can recall those wonderful days. 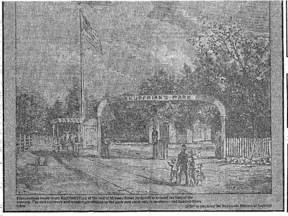