Home Plate Farm was located on 558 Dutton Road in Sudbury, Massachusetts. It was owned by baseball legend Babe Ruth from 1922 to 1926. Ruth had previously rented a modest cottage on Willis Pond while still with the Red Sox. That is where the supposed piano sinking took place. A few versions have Babe tossing the piano into the pond, but more likely that he and friends pushed it out onto the ice for a daytime party, and then left it there rather than try to push it pack up the hill to the cabin. It is now a private residence.

George Herman "Babe" Ruth (February 6, 1895 – August 16, 1948), was born at 216 Emory Street in the Pigtown section of Baltimore, Maryland. Ruth's parents, Katherine (née Schamberger) and George Herman Ruth Sr., were both of German ancestry. According to the 1880 census, his parents were born in Maryland. His paternal grandparents were from Prussia and Hanover. Ruth Sr. worked a series of jobs that included lightning rod salesman and streetcar operator. The elder Ruth then became a counterman in a family-owned combination grocery and saloon business on Frederick Street. George Ruth Jr. was born in the house of his maternal grandfather, Pius Schamberger, a German immigrant and trade unionist. Only one of young Ruth's seven siblings, his younger sister Mamie, survived infancy.

He began his MLB career as a star left-handed pitcher for the Boston Red Sox, but achieved his greatest fame as a slugging outfielder for the New York Yankees. Ruth is regarded as one of the greatest sports heroes in American culture and is considered by many to be the greatest baseball player of all time. In 1936, Ruth was elected into the Baseball Hall of Fame as one of its "first five" inaugural members. 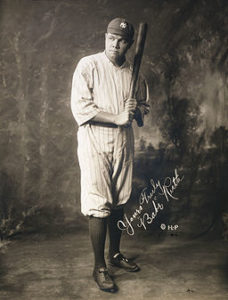