An 8-ft-tall bronze figure of Gunther Gebel-Williams stands dramatically in performance costume on a pedestal, as he would have stood in the middle of one of his many trained-animal performances with the Ringling Bros. and Barnum & Bailey Circus. It is located at the 1927 Venice Train Depot, which is home to the historical society.

Gebel-Williams (1934-2001) was born in Schweidnitz, Lower Silesia. As a child, he and his mother emigrated to Germany when Silesia was ceded to Poland after World War II.

Gebel and his mother started working for Circus Williams in Germany in 1947. When its owner suddenly died, the owner's widow asked the 18-year-old Gebel to become the animal trainer which began his career. He then took on the additional surname Williams.

Gebel-Williams came to prominence during the early days of television when the circus was still a popular form of entertainment. His appearances on television shows like The Ed Sullivan Show and The Tonight Show Starring Johnny Carson, in addition to his work with the Ringling Bros. and Barnum & Bailey Circus, accelerated his reputation as a tamer of elephants and tigers.

After retiring, he took a management position as Vice President of Animal Care for the circus. He passed down his skills as an animal trainer and performer to his son, Mark. He died in Venice, FL in 2001. 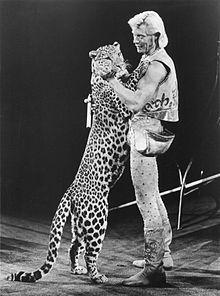