Henry Nehrling (May 9, 1853 – November 22, 1929) was born in the town of Herman, near Howards Grove, Sheboygan County, Wisconsin. He late became an ornithologist and horticulturist. His father was Carl Nehrling and his mother was Elizabeth Ruge. He was initially taught at home, and was later sent to a Lutheran parochial school located several miles from his home. His daily walks winter and summer to and from school, through then the primeval forest, familiarized him with every aspect of nature and helped to develop the passionate love for the outdoors, the birds and flowers, that characterized his entire life. He soon learned the haunts of the wild things of the woods and the fields, where the Wild Pigeons roosted, where the Grouse had its drumming log and where grew the rarer plants.

Prior to his retirement, he had become interested in Florida and bought land in Gotha in 1884. At this property, which he called Palm Cottage, Nehrling experimented with over three thousand species of plants, trees, shrubs and vines. Three hundred of those became staples in the landscape of Florida. After a freeze in 1917 killed most of his plants, he relocated to Naples, Florida, and started a new garden there. Nehrling named his second garden, H. Nehrling's Tropical Garden and Arboretum. In Naples, he carried on his pioneering work, and grew, hybridized, and popularized many exotic plants for the general public. Caladiums, palms, bamboo and Hippeastrums (the latter commonly and erroneously referred to as 'amaryllis') were all introduced to the United States by way of his Palm Cottage Gardens. He established a strong friendship with Theodore Luqueer Mead of nearby Oviedo, Florida and they collaborated on many plant experiments.

Nehrling died on November 22, 1929, and was laid to rest in the Gotha Cemetery. His Naples garden was preserved as the Jungle Larry's Caribbean Gardens, now the Naples Zoo.

During his lifetime, he not only published a number of books and essays, but also contributed to many journals and publications, including some German-language periodicals:

In 2009, The Henry Nehrling Society, purchased Nehrling's home and gardens in Gotha. 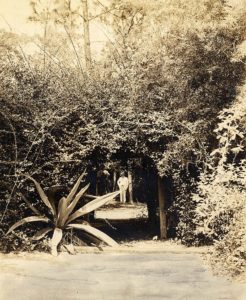