The Hebrew Orphan Asylum is an historic institutional orphanage and former hospital building located in the Mosher neighborhood of Baltimore. The building also served as West Baltimore General Hospital, Lutheran Hospital of Maryland and is currently being redeveloped as a health care center.

Built in 1875 in a Victorian-Romanesque style of red brick, the Hebrew Orphan Asylum replaced the old Calverton Mansion (built in 1815) which had been damaged by a fire in 1874. The mansion had previously been used to house orphans, and when the building burnt down, wealthy German Jews in Baltimore donated to have a new structure erected. German-born architect Edward Lupus was involved in the unique design. The history of the asylum follows the history of the Jewish community in Baltimore, which increased rapidly with immigration from Europe in the 19th and 20th centuries. The building transitioned to serve as the West Baltimore General Hospital from 1923 through 1950 and finally the Lutheran Hospital of Maryland from 1950 to 1989.

The building was added to the U.S. National Register of Historic Places in October 2010. 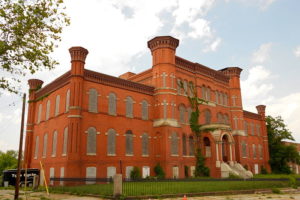