Fans of HBO’s newest and much anticipated series “The Gilded Age” directed by “Downton Abbey” creator Julian Fellowes will know this time period of approximately 40 years in American history, from 1870 to about 1910, for its lavish clothing, displays of opulence, and the many newly wealthy families who ruthlessly strove for their place in society. It was the time of the Astors and the Vanderbilts whose wealth and influence set the tone for high society. It was also an era of rapid economic growth with a seemingly insatiable demand for labor, the expansion of industrialization and mass production, which slowly replaced handmade goods, and the railroad that transported wares and people across the vast country at unprecedented speeds, as the very symbol of modernity and technological advances. The name is derived from Mark Twain’s and Charles Dudley Warner’s 1873 satirical novel The Gilded Age: A Tale of Today about competition and greed. Fortunes were quickly built and sometimes quickly lost. Wages rose due to the high demand for workers, and millions of Europeans crossed the Atlantic to immigrate to the United States. 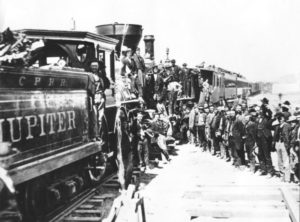 Peter A.B. Widener was the son of a Philadelphia, PA butcher Johannes Widener and his wife Sarah, née Fulmer. His father and mother both had German immigrant ancestors. His maternal grandfather was from Calw, Baden-Württemberg, whilst his paternal ancestors arrived in Pennsylvania from Hesse-Cassel in the mid-1700s. 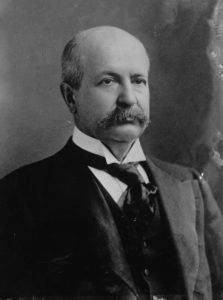 Peter used the social unrest of the Civil War to his advantage, and won a contract to supply mutton to all Union Army troops within 10 miles of the city of Philadelphia. In addition to being a major transportation hub for Union soldiers, Philadelphia was also the location of several large Union military hospitals. Supplying the troops was profitable, and he was able to earn $50,000, or about $850,000 today, which he promptly invested in horse-drawn streetcar lines.

In 1858, he married Hannah Josephine Dunton (1836–1896), and they had three sons. Unfortunately, his business acumen and success did not prevent him from several personal tragedies. His first son Harry (1859-1874) died from typhoid fever at age 15, and his second son George Dunton Widener (1861–1912) perished aboard the RMS Titanic. Only his son youngest son George Jr. (1889-1971), a notable horse racing figure, outlived his father, and also followed in his philanthropic footsteps by becoming the chairman of the Philadelphia Museum of Art.

After the war, Peter  became involved in Philadelphia politics, and rose to the position of City Treasurer in 1871.  A decade later, in 1883, he was listed as a founding partner in the Philadelphia Traction Company, which electrified all the lines and also expanded into other major American cities.

Together with his business partner, William Elkins, he invested with various entrepreneurs, and accumulated tremendous wealth, a career and social progression that typified the Gilded Age. Peter Widener’s money helped him co-found U.S. Steel and the American Tobacco Company; he also acquired significant holdings in Standard Oil and the International Mercantile Marine Company. 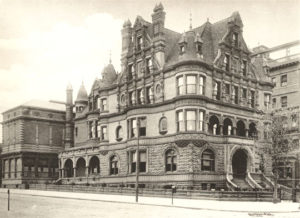 The first residence, finished in 1887, was located at the northwest corner of Broad Street and Girard Avenue. In 1900, after the death of his wife, he donated it to the Free Library of Philadelphia. The building burned down in 1980 was later demolished.

In addition to an urban residence, many wealthy families also owned country estates, and Peter hired German-American architect Horace Trumbauer in 1897 to design an elaborate 110-room Georgian-style mansion called Lynnewood Hall in Elkins Park, PA, where he housed his large art collection which included more than a dozen paintings by Dutch masters Rembrandt and Vermeer, as well as works by the French Impressionists Édouard Manet and Auguste Renoir. 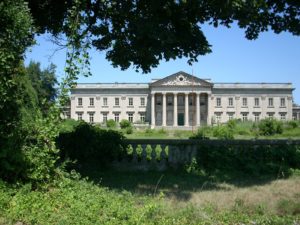 Lynnewood launched Trumbauer’s career as the pre-eminent architect of the Gilded Age whose later commissions included The Elms and Miramar in Newport, Rhode Island. Peter Widener died at Lynnewood in 1915 after an extended illness. He is buried at Laurel Hill Cemetery in Philadelphia. His estate was valued at  $31.5 million, the equivalent of $872 million today.