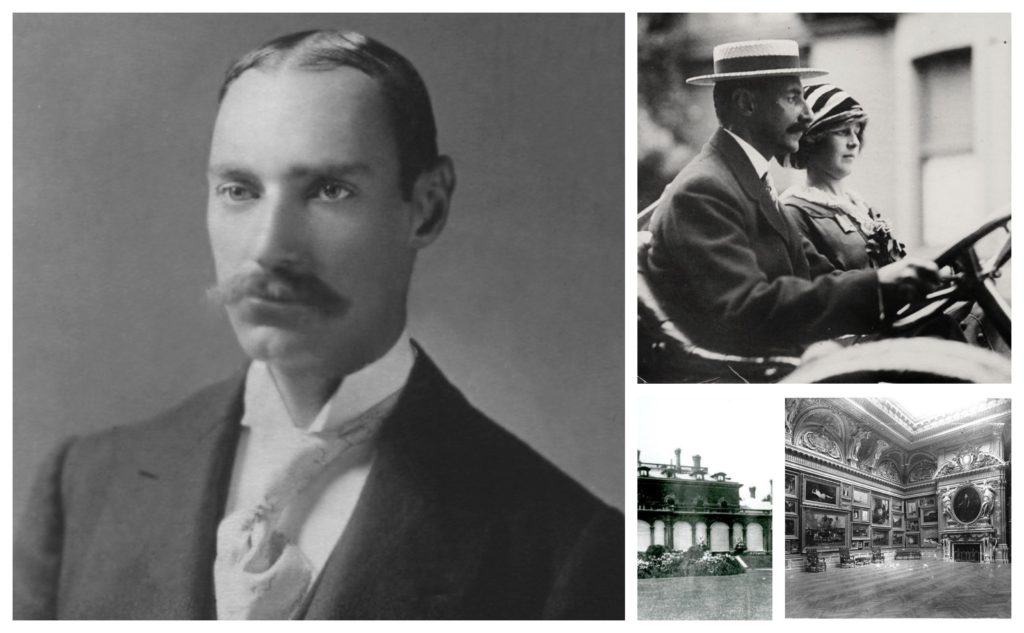 When discussing the time period of The Gilded Age, it is almost impossible not to bring up the Astor Family. A prime example of old money, the Astors descended from a German immigrant by the name of John Jacob Astor I, who made his fortune during the late 18th century through trading. He was born in Waldorf, Germany on July 17, 1763, and first left Germany in his late teens for London, working with his older brother George in the business of making instruments. He arrived in the United States several years later, where he gained his fortune through fur trading. While the Embargo Act and the War of 1812 negatively affected his business, he was about to lobby Congress into passing laws allowing him to continue his business. By the time he died in 1848, John Jacob Astor I was America’s wealthiest man, and his fortune was worth approximately $20 Million (equal to over $100 billion in today’s economy).

Fans of Netflix’s 2022 show The Gilded Age will remember that among the historical figures introduced in season one include Caroline Webster “Lina” Schermerhorn Astor of the prominent Astor family. 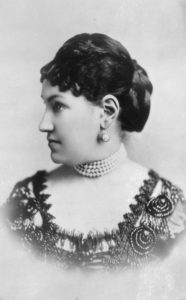 Known as “The Mrs. Astor,” she reigned as the queen of society in New York during the Gilded Age, and is noted for creating the list “The Four Hundred” with Ward McAllister. This list consisted of the names of primarily “old money” families who made up high society in New York during the Gilded Age. The reason for this was due to the “new money” families, who came into wealth during the Gilded Age, threatening to uproot the social hierarchy long dominated by families such as the Astors. The influence of “The Mrs. Astor” on society was so great that a snub from her could lead to social suicide.

Col. John Jacob “Jack” Astor IV was born on July 13, 1864 in Rhinebeck, New York. He was the only son, as well as the youngest child, of William Backhouse Astor Jr., and Caroline Webster Schermerhorn. Astor attended St. Paul’s School in Concord, New Hampshire, then Havard, although it is unclear whether or not Astor graduated from Harvard. Regardless, after his time at Havard, Col. Astor traveled Europe before returning to the United States in 1891 after three years abroad to manage his family’s estate. 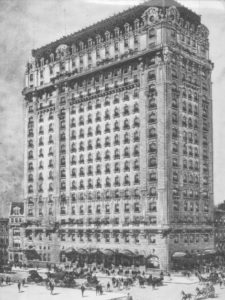 Col. Astor is known primarily for the hotels he built, most notably The Astoria, the St. Regis (shown left), and The Knickerbocker. The Astoria was constructed during a feud with his cousin William Waldorf Astor, who demolished his mansion to build the Waldorf, a 13-story high hotel, next to Col. Astor’s mother’s mansion. One of  the main reasons this feud occurred was that Waldorf saw himself to be the better fit for the position of head of the Astor Family. He also believed that the title of “Mrs. Astor” belonged to his wife, and not Caroline Schermerhorn Astor.

In retaliation, Col. Astor had his mother’s mansion demolished for the construction of The Astoria. The hotel surpassed the Waldorf in height at 17-stories high. The cousins would eventually come to a truce, and had both buildings connected through a 980-foot long corridor called the “Peacock Alley,” thus creating the Waldorf-Astoria hotel. The original hotel would be demolished in 1929, in order for construction of the Empire State Building to occur, but another would open in 1931 several blocks down, which still remains standing today.

During the Spanish-American War, Col. Astor personally financed and equipped a battery, which was then named after him, fought at Santiago, and 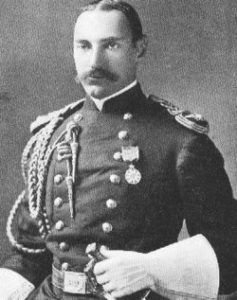 allowed his yacht Nourmahaul to be used at the disposal of the Navy. This resulted in him having the rank of Colonel conferred onto him, something he took pride in.

Interestingly, Col. Astor also wrote an early science fiction novel titled A Journey in Other Worlds, which was published in 1894. The novel takes place in the 21st century, centered on space travel and the colonization of other planets such as Jupiter and Saturn. Furthermore, he was also the inventor of a bicycle break, along with a turbine engine.

In 1891, Col. Astor married Ava Lowle Willing and had two children with her, William Vincent Astor and Ava Alice Murial Astor. However, their marriage was tumultuous, and led to divorce in 1909, leading to a scandal. Col. Astor would then marry Madeleine Talmage Force, who was eighteen years old, when he was forty-seven years old in 1911. However, the couple struggled to find a clergyman to wed them, as many refused to marry previously divorced individuals. Astor at one point even offered $1,000 to Rev. Dr. Edward C. Johnson to wed him and Miss Force. Rev. Johnson refused in the end. The Rev. Joseph Lambert would marry the two, but due to the heavy criticism he received, resigned from the pulpit. The newlyweds would leave for their honeymoon in Europe after the wedding, noted to have traveled to Rome, Egypt, and Paris. 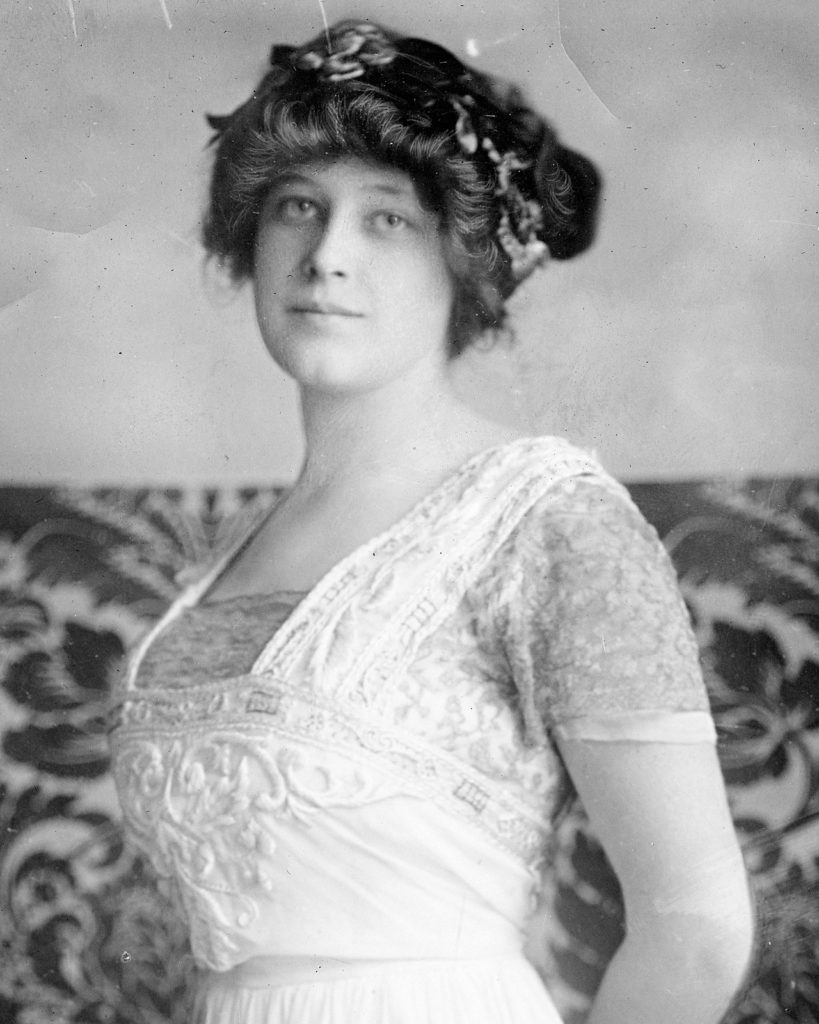 In 1912, Col. Astor and his wife, who was pregnant with their first child, would board the RMS Titanic to return to the United States from Paris, traveling first class. Tragically, however, Col. Astor would not make it onto one of the lifeboats after the ship struck the iceberg, dying onboard the ship along with several servants, and his pet Airedale, Kitty. 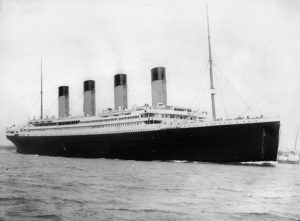 Madeline survived the ship sinking, giving birth to a son, named John Jacob Astor VI after his father, on August 14th, 1912. Col. Astor’s body was recovered by the Mackay-Bennett, a cable ship, on April 22nd of the same year. Among the items found on his body was a large sum of money, and a gold pocket watch (claimed by William Vincent Astor). Col. Astor was buried in early May in Trinity Church Cemetery. The majority of Col. Astor’s fortune would go to William Vincent Astor, his son from his first marriage, as John Jacob Astor VI had not been born when his father passed.

Additionally, the Astor family’s “summer cottage” Beechwood (below), located in Newport, Rhode Island, appears in the first season of The Gilded Age. The real Beechwood, for a time, was a living History museum, until it was purchased by billionaire Larry Ellison in 2010.