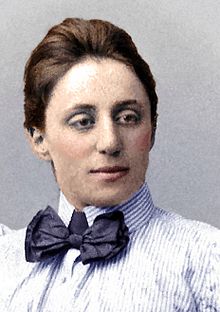 Every March, we shine the spotlight on significant German-American women, whose names and accomplishments are not as well-known as they should be, but there is no need to limit ourselves to just one month. Today, we feature Amalie Emmy Noether (1882 – 1935), who discovered Noether’s Theorem in 1915. Used in theoretical physics and the calculus of variations, the theorem states that each differentiable symmetry of a physical system’s action has a corresponding conservation law.

Noether was born in Erlangen, which was part of the Kingdom of Bavaria. Her father, Max, was also a mathematician, and taught at the University of Erlangen where he had co-founded the field of algebraic geometry. Young Emmy had a typical upbringing, and in addition to her academic lessons, she was taught to cook and to play the piano. She was proficient in English and French, and pursued teaching credentials in these languages. Although she passed her examination with top scores, she chose to pursue university studies in Erlangen instead. In 1900, it was highly unusual for a woman to attend university, and she was one of only two women amongst almost 1,000 students. She taught at Erlangen’s Mathematical Institute for seven years, always without pay, and eventually moved to Göttingen in 1915. Despite the university’s interest in her, male faculty members opposed the hiring of a female lecturer, and she once again worked without remuneration. Her first paid teaching position was not until 1923. In 1933, Noether left Germany for Pennsylvania, where she had been offered a guest lecturer position at Bryn Mawr. She died only two years later from surgery complications, and is buried on the Bryn Mawr campus. Learn more about Emmy Noether, and other fascinating German-Americans in GAHF’s book How German Ingenuity Inspired America: More Fun, More Beauty, More Freedom.