Indianapolis was a major destination for German immigrants in the 19th century, spurred by political refugees leaving Europe after the failed Revolutions of 1848. By 1850, people of German heritage constituted over 12 percent of the city's population. The growing German community desired to retain their heritage, and did so through the creation of social clubs.

The Turner movement was one of the largest German-American cultural groups of the time, promoting German ideals through education and physical fitness. The Turner movement created Turnvereine (or gymnastics clubs), where members gathered for both social and athletic activities.

In 1893 members of the Indianapolis German-American community living on the south side of Indianapolis broke away from the Indianapolis Socialer Turnverein to form the Indianapolis South Side Turners. The group first rented a space in the Phoenix Garden, but as the organization grew it began to look for a permanent home. They selected a site near the intersection of Madison Avenue and Prospect Street. Construction began in June 1900 and was completed in November of that year. In the beginning, the South Side Turnverein Hall hosted eight turning classes with 300 students between the ages of 6 and 25. Their hall was equipped with a gymnasium and meeting rooms, at 306 Prospect Street. The building also contained two bowling alleys, a reception and dining room, kitchen, barroom, and the gymnasium. The gymnasium could also serve as an auditorium, with space for over 800 people. The organization stressed physical fitness and the preservation of German culture and was a social and cultural center for German-Americans in the southern part of the city. The group sold the building in 1977 and was then based in German Park on South Meridian Street. 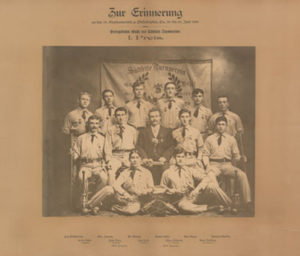