Located at Station and Halleck Streets, it was active from 1870 to 1918. It occupies the site of the old Christian Jutz brewery built in 1857.

The Vienna Brewery had originally been located across the street where it was owned by Messrs. Houghton and Cole of Maine and Vermont. They bought the Christian Jutz property and moved their main operations across the street, converting their original property to a stable to house their several transport horses. Here they produced Vienna Lager from a German recipe. The lighter German and Austrian Lager beers came into favor in the 1850s and 60s displacing the heavier English/Irish Ales. Besides Vienna Lager, they made Pavonia Lager Beer, Vienna Old Time Lager and Rockland Ale.

This is the only landmark brewery in Boston, having been protected by the Boston Landmarks Commission, despite its poor condition. It had a five story main brewing building with a large cupola, an office building, three storage buildings, a coopering or barrel-making building, and a power plant. It was a beautiful building with brick used for architectural features instead of stonework or terra cotta. The sweeping arches are built of brick while the sills and parts of the arches are granite. The floor joists are supported by architectural ironwork. The exterior “X” shaped elements on the sides of the buildings are iron brick-ties that support the brick bearing-walls and were common design features at that time. They were often connected by long interior iron rods, spanning between the walls, to help hold the structure together under the floor loads of several stories.

The main brewing buildings had robust hoists and pumps to lift the grains and water up to the top floor to begin the brewing process. Gravity would then take the brew down to the various levels and processes below. This, then, was a “vertical” brewery. When pumping technology improved, the vertical process was discontinued in favor of the “horizontal” brewery with lower buildings and other efficiencies. This brewery closed when Prohibition arrived in 1919 and it never reopened on a full-scale basis. 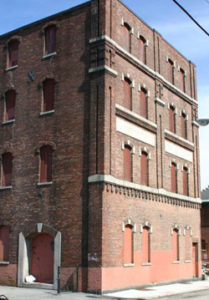