The House on the Pond/Lillian Wald House

Lillian Wald: Nursing pioneer, humanitarian, and author — those are the nouns often used to describe this great woman who founded American community nursing and the Henry Street Settlement in NYC. However, Lillian who was born into a liberal German-Jewish family in Cincinnati was also a strong supporter of women’s suffrage. Having moved to Rochester, NY at age 12, she attended a boarding school for young ladies, and, aged 16, applied to Vassar College where she was turned down for being too young. In 1889, she trained to be a nurse at New York Hospital, and graduated in 1891. She desired to become a doctor, and enrolled in courses at the Women’s Medical College. Her work with immigrant families on the Lower East Side made her realize “all the maladjustments of our social and economic relations epitomized in this brief journey”. While her initial goal was affordable health care for  poor city dwellers, she soon organized nursing lectures, and pioneered the concept of public health nursing. Her efforts were well received by New York’s wealthy German-Jewish elites, who supported her humanitarian endeavors with generous donations.

She spent her later years in Westport, CT at this House on the Pond. 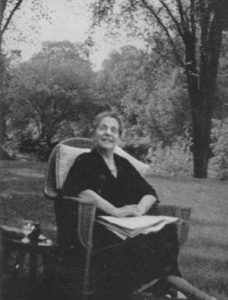