"Julius H. Deglow established a brewery in 1866 on a site of what became the Bavarian Brewery a few years later. From the beginning, the brewery had several different ownerships and was fraught with difficulties, including a bankruptcy in 1877.  In 1880, the brewmaster, Charles Ruh, became a proprietor of the brewery along with John Meyer. However, a year later Charles Ruh died in an accident and his brother Anton succeeded him."

The brewery was originally located on Pike Street, but expanded to 12th Street within a decade. After John Meyer acquired the brewery in 1881, he sold an interest to William Riedlin in 1882. The company operated under the proprietorship of Meyer & Riedlin starting in 1884, before becoming incorporated as the Bavarian Brewery Co. in 1889 by William Riedlin. The company was family owned until it was acquired by International Breweries, Inc.(IBI) in 1959. However, it operated as the Bavarian Division of IBI and continued to produce its flagship beer, Bavarian's, until the facility closed in 1966. The property was placed on the National Register of Historic Places and renovated as a multipurpose complex for food, beverage and entertainment uses in 1996. It operated as the Brew Works at the Party Source and Jillian's, but closed in 2006. The former structure containing the Brew and Mill Houses, built in 1911, was repurposed into office space becoming part of the Kenton County Government Center, opening in 2019. This office complex has a Bavarian Brewery Exhibit and it is accompanied by a Bavarian Brewery (United States) website.

The brewery was a hallmark of Covington, Kentucky for 150 years, and the site is now owned by Kenton County and will serve as the location of a new administration building. However, some of the original structures are still standing and are on the Register of Historic Places. 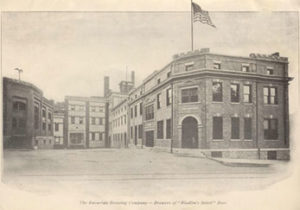