Built in 1894, the Sutro Baths was located north of Ocean Beach, the Cliff House, Seal Rocks, and west of Sutro Heights Park. The structure burned down to its concrete foundation in June 1966; its ruins are located in the Golden Gate National Recreation Area and the Sutro Historic District.

Creator of the Sutro Baths was Adolph Heinrich Joseph Sutro (April 29, 1830 – August 8, 1898), a German-American engineer, politician and philanthropist who served as the 24th mayor of San Francisco from 1895 until 1897.  Born in Aachen, Rhine Province, Prussia (today North Rhine-Westphalia, Germany), Sutro was the oldest of eleven children of German Jews Rosa (Warendorff) and Emanuel Sutro; he moved to Virginia City, Nevada and made a fortune at the Comstock Lode. Several places in San Francisco bear his name in remembrance of his life and contributions to the city 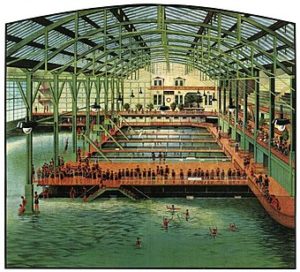