For centuries businesses have heralded any aspect of a product that can distance it from the competition. Location, processes, raw materials, and packaging have all been used to project an appealing cachet. Lacking those, they often resort to adjectives such as: quality, purity, tradition, best, finest, and preferred. But among all ways to boast a product none works better than the simple proclamation: First!

Brewer John Roessle, a native of Stuttgart, became a "first" when he established a small brewery at 60 Pynchon street in Roxbury. It earned him a spot in New England beer history because from its opening in 1846 Roessle devoted production exclusively to brewing a new beer style that was capturing America's taste.

Originating in Germany, the yeast for this beer arrived in the US only shortly before Roessle began construction of his brewery. It produced a distinctively clean beer with a crisp after taste unavailable in the much fruitier ale family of beer. This characteristic signature was the by-product of a lengthy, cold fermentation and so Germans simply named it after their word for storage - lager. The significance of the date not only made Roessle a pioneer of lager in the Northeast, it placed him among the first in the country to brew this style.

In those early days Roessle's brewery had a maximum capacity of only 300 barrels, but despite its small size it had advantages over ale breweries. First, its flagship beer "Taffel" quickly became a favorite of Boston's German population. More importantly, Roessle wasn't burdened with the expense of distribution; enthusiastic and loyal customers bought every drop from the brewery's door. It didn't take long for Roessle to capitalize on the brand's popularity by expanding the brewery. In fact, each time production increased sales rose equally.

Through four decades Roessle personally managed the business, then at his death in 1885 ownership was assumed by son John Roessle Jr. who directed operations for 11 more years. This wasn't the brewery's only father and son team. For over twenty years Robert Leiber carried out the duties of head brewer and when he died in 1890 the brew kettle was turned over to his son Albert. The fathers and sons of Roessle brewing performed so well the brewery was admired in the community, but not in the way they imagined.

During the 1890s breweries became the favorite investment of syndicates, and Roessle's reputation made it one of Boston's most attractive takeover targets. Among those noting the company's impressive record was the New England Brewing Company, which presented John Roessle Jr. an offer substantial enough to make him sell. That same year they acquired the Haffenreffer brewery and two years later the Suffolk Brewing Company, and shifted the business address to 1250 Columbus Avenue, Boston. Despite consolidating, the continuing popularity of the Roessle brand prompted the new owners to preserve the name, and as the century turned the facility hit an annual production figure of 65,000 barrels.

For more than 20 years the syndicate reaped the profits of the Roessle's name, as the beer slowly captured more of the Boston market. By 1918 the brewery was growing outmoded and badly needed a modernization. Then the unimaginable happened--Prohibition. At its onset, the syndicate closed the Roessle plant. It lay slowly decaying, becoming more obsolete with each day of prohibition's 14 year lock out.

When repeal came they considered it too inefficient for further operation and the only plant they reopened was that of Haffenreffer. Once a darling of the city, the doors were shut forever, but no one will ever again claim the title of New England's first. 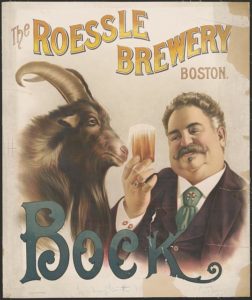