Sutro was born to a Jewish family in Aachen, Germany. He has six brothers and three sisters.[1] His brother Adolph Sutro became the first Jewish Mayor of San Francisco and built the Sutro Baths. His brother Theodore Sutro, husband of Florence Sutro, was seminal in the building and financing the Sutro Tunnel first proposed by his brother Adolph. He studied the organ with Nicolas Lemmens in Brussels and moved to the United States in 1851, undertaking further studies at the Peabody Institute. He hosted a musical appreciation society known as the Wednesday Club. With fellow alum Fritz Finke, Sutro helped found the Oratorio Society of Baltimore, and became its main conductor. 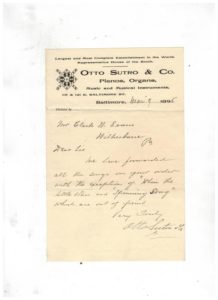