Located on the North Side of Chicago, this vibrant district was once the center of German-American life. In the 1840s, farming was begun in this area by newly arrived German Americans. Two brothers, Lyman and Joseph Budlong arrived in 1857 to start a commercial pickling operation near what is today Lincoln Avenue and Berwyn. They later opened a commercial green house and flower fields to provide flowers for the then new Rosehill Cemetery. In 1925, to honor Abraham Lincoln, the Chicago City Council named the area Lincoln Square, and a prominent statue of the namesake was erected in 1956. The Chamber of Commerce has been leading the way in reviving this area since the post-WWII years, and have successfully filled once empty storefronts.

The district is home to such landmarks as the six-story DANKHaus, the historic Rosehill Cemetery, and a business district featuring old-world flair with European-style shops and a lantern, the Lombard Lamp, imported from Hamburg, Germany. Click here to view a YouTube clip. The lamp was gifted to the City of Chicago in 1979 by Hamburg to celebrate the ongoing friendship between the two places and its people. 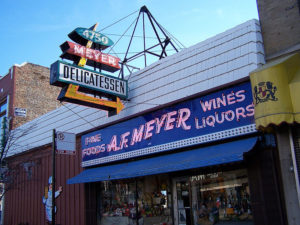