King Gambrinus is a public artwork by German-American sculptor and wood carver Carl Kuehns, a native of Magdeburg, which depicts Gambrinus, the legendary European culture hero celebrated as an icon of beer, brewing, joviality, and joie de vivre. It is located in the courtyard of the Best Place tavern and hall at the former site of the Pabst Brewing Company Former Corporate Office Building, that is near downtown Milwaukee, WI, United States.

The original King Gambrinus was carved in wood by German artist Gustav Haug, and installed at the roof peak of the Pabst Brewhouse in 1857. The company grew quickly and expanded its complex such that by 1872 a new statue was needed. Kuehns, a carver with the Matthew Brothers Furniture Company, created a copy of Haug's wooden sculpture and the new work was installed atop an archway leading to the loading yard. The wooden sculpture gradually deteriorated, and in 1966, the new cast aluminum version was commissioned. It stood atop the entrance to the brewery's Stirnewert until 1996, when the brewery closed. The original wood sculpture by Kuehns was sold to a developer in Ozaukee County. From 1997 to 2004, the aluminum statue was stored at Milwaukee's Miller Brewing, a contract brewer for Pabst.

Another King Gambrinus Sculpture is located in Baltimore. 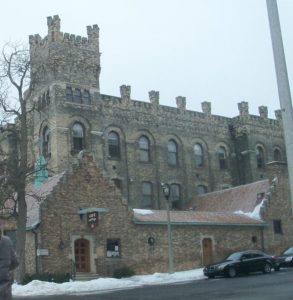