The house was built in 1888  for J. George Mueller and his wife Julia by Julia's father Henry Schnull.  Most of the detail on this Queen Anne house has been lost, however, the jerkinhead roof and imbricated gable shingle give hints to its style. A lifelong resident of Indianapolis, Mueller (1860-1952) was a druggist whose first store was located at Washington and East Streets. In 1890 he helped establish the Indianapolis Drug Company, which stayed in operation until 1902. At that time he formed the Mooney-Mueller Drug Company. This firm merged with Ward Brothers Drug Company in 1915 to become the Mooney-Mueller-Ward Drug Company. In 1904 Mueller moved next door, to the Henry Schnull home, where he died in https://80smusiclyrics.com/situs-judi-slot-online-bonus-new-member-200/. 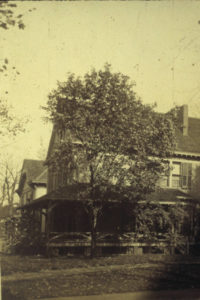