"Organized in 1901, the German-American Club was one of the few non-Latin ethnic clubs in Tampa. Club members laid the cornerstone for a building on the northeast corner of Nebraska Avenue and 11th Street on February 23, 1908, followed by a grand opening on January 1, 1909. Fine classical details and proportions marked the three-story building, with concrete bock molded to appear as tooled stone masonry. With a stage for speakers or theatrical productions, a swimming pool and a bowling alley, the building served Tampas German and Jewish population until its sale in 1919. From 1919 to 1924, it housed Tampa's Labor Temple Association. The Young Men's Hebrew Association bought the building in 1924 and remained until 1944. Focusing on education and recreation for Tampas Jewish community, the association held gym, art, and music classes, and outdoor sports and leisure activities. Various groups including an insurance company and the Hispanic organization, Los Caballeros de la Luz, occupied the building after 1944."

The building still exists today, but its German history is all but forgotten. 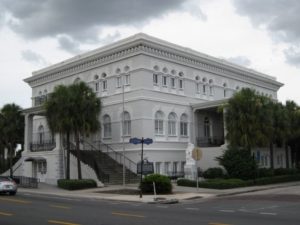