Moving now to Station and Parker Streets we come to a large parking lot which is the former site of one of the largest and best known Boston breweries, the Burkhardt Brewery, active from 1850 to 1918. Rudolph Frederick Haffenreffer began his career here and became Burkhardt’s brewmaster.

Burkhardt built two large six-story Roxbury Puddingstone buildings and a large stable forming an L shaped enclosure around the adjacent Houghton and Company Vienna Brewery. Gottlieb, or George Burkhardt and his son, Gottlieb Jr., ran the brewery until Gottlieb Senior died in 1884. It continued brewing until Prohibition closed it in 1919. It stayed open, however, until 1929 producing cereal and other grain products during the dry period. Burkhardt made both beer and ale. Their labels were Tivoli Beer, Extra Lager Beer, and; starting in 1912, Red Sox Beer, to honor that year’s World Series Champions. They also made Augsburger Lager & Augsburger Dark, Salvator Lager, Brown Stock Lager and Bock style Lager. They produced over 100,000 barrels a year of beer alone, plus Golden Sheaf Ale, Cream Ale, Brown Stock Ale, Old Stock Porter, India Pale Ale and; also starting in 1912, Pennant Ale.

Most of the skilled brewery workers were Germans and Austrians. Other skilled crafts included mechanics, boilermakers, steamfitters, coopers, stablemen, teamsters, ice handlers, etc. Gottlieb Burkhardt Senior lived directly across the street from his brewery. Wentworth Institute, who planned to put a hockey rink here until it was made a Boston Landmark, presently owns the building. 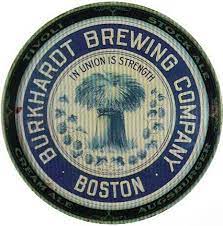