Bloede's Dam was a hydroelectric dam on the Patapsco River in Maryland. It was the first known instance of a submerged hydroelectric plant, where the power plant was actually housed under the spillway. Built in 1906, by Dresden-born Victor Gustav Bloede (1849-1937) who arrived in the U.S. in July of 1850. It is also recognized as one of the earliest dams constructed of reinforced concrete. This area is now part of Patapsco Valley State Park Avalon Area.

Bloede's family settled in Brooklyn, New York, where his parents hosted a salon, which attracted such 19th-century figures as Thomas Bailey Aldrich. Victor received the groundwork of his education in public school and by the age of 12 he began to support himself by working as an office boy and earned the means to pursue his studies. While working by day he studied at night at the Cooper Institute (more properly known as Cooper Union) in New York City, where he was mentored by Peter Cooper.

In 1868, Bloede secured a position at Chemical Works, a small chemical company in Brooklyn, New York, along the Gowanus creek canal. He began to study chemical manufacturing and pharmaceutical preparations, and in 1873, he moved to Pomeroy, Ohio, the center of salt manufacturing along the Ohio River, and eventually bough his own company. he became a successful entrepreneur and took an interest in power generation.

In 1906, Bloede organized the Avalon Water Works and the Patapsco Electric & Manufacturing Co. He financed the construction and also oversaw its progress. The dam itself was 220 feet (67 m) long, 40 feet (12 m) wide at the base and had a drop of 26.5 feet (8.1 m). It was an Ambursen Hydraulic Construction Company (Boston type) reinforced concrete slab and buttress dam. The power plant technology and equipment were state of the art when it went into operation in 1907, with 34-inch Poole & Hunt Leffel Wheels and two 30-inch 500 hp horizontal Samson Turbines capable of an electromotive force of 11,000 volts. The remains of the dam were removed in 2019. 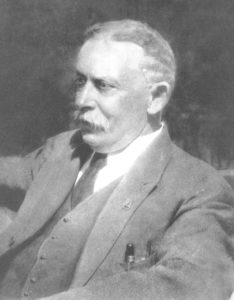