During the middle of the 19th century, German-American singing groups sprang up all over the country. Their focus was the preservation of German musical tradition and keeping the culture alive. Interest in the music of Germany and German-speaking Europe was at its height in the 1800s. On January 9, 1847, a group of 25 men of German heritage founded a male singing society, dedicated in particular to the promotion of vocal and instrumental music. The society's name was “Deutscher Liederkranz der Stadt New York”.

Continued immigration from Germany along with a growing interest in German music amongst the population of New York, ensured the Liederkranz's survival. In 1881, under the leadership of William Steinway, one of the founders of Steinway and Sons, William Steinway, a building fund for a clubhouse was raised in the amount of $150,000 within 2 days. The cornerstone was laid on October 1st, 1881 at 111-119 East 58th Street, east of Park Avenue. World War I changed Americans' attitudes towards German-Americans and Germany, and resulted in a name change and a change of language amongst members of the club.

The Liederkranz Club also supported many charitable affairs, including benefit concerts for the “German Hospital”, later renamed the Lenox Hill Hospital in New York City, and the Liederkranz enjoyed an ongoing friendship with the Metropolitan Opera. However, a reduction in membership required the sale of the beautiful old building, and the Henry Phipps townhouse was purchased.

The Liederkranz Foundation, Inc. was established in 1948 to sponsor musical events, particularly those devoted to vocal music and to provide financial support for young artists. 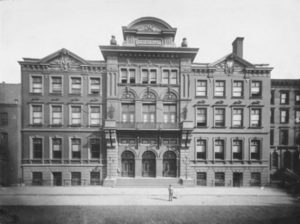