The Athenæum/Das Deutsche Haus was built for the Indianapolis Socialer Turnverein (1893-1898) as a “house of culture” for the mind and body. It was awarded the National Historic Landmark designation in 2016.

Learn more about the rich and storied background of this Indianapolis treasure, and come visit!

The Athenæum/Das Deutsche Haus is an excellent example of Germanic architectural influence in the Midwest during the latter part of the 19th century. It is also a monument to the organization of Americans of German descent in the United States who dedicated themselves to cultural and physical development in their new country.

The Indianapolis firm of Vonnegut and Bohn was responsible for both phases of the structure. The entire building is in the German Renaissance Revival style – a popular style in Germany during the Second Reich (1871-1918). It revived the architecture of Renaissance Germany of the 16th and 17th centuries.

The Atheneaum is listed three times in the National Register of Historic Places, for (1) individually listed for architecture and historical significance; (2) as part of the Massachusetts Avenue Commerical District; and (3) within the Lockerbie Square historic district; specifically for location and historical theme of the Germantown area. 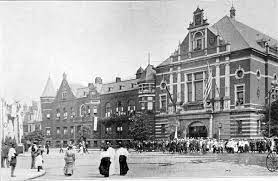