The Brooklyn Bridge and its German-American Father 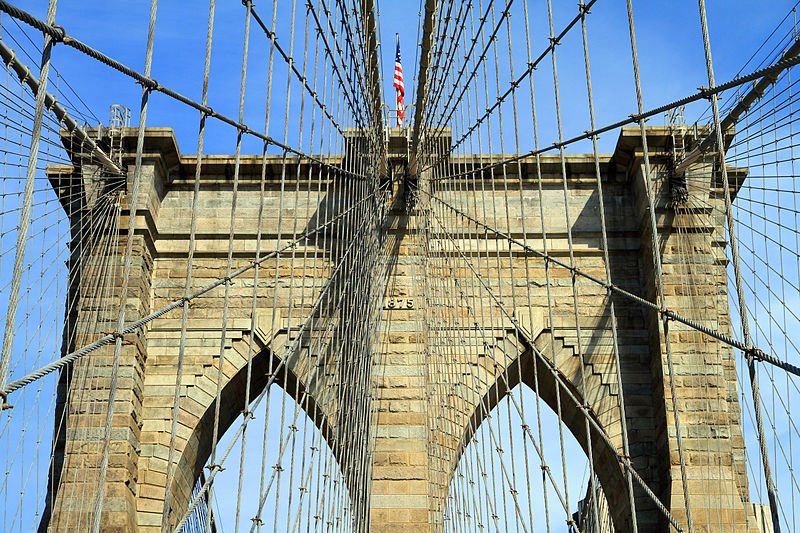 Since the official launch of our new national online directory for all things German-American, we have been asked more than once why we feature a photo of a bridge. The bridge in question is the Brooklyn Bridge in New York City, which spans the East River between the boroughs of Manhattan and Brooklyn. It first opened on May 24, 1883, and was once the longest suspension bridge in the world.

This technical masterpiece was designed by German-born civil engineer Johann August Röbling, who later changed his name to John A. Roebling. Born in 1806 in Mühlhausen, he studied architecture and engineering at the Bauhaus Akademie in Berlin (no relation to the famous Bauhaus of the 20th century) with particular emphasis on bridge and foundation construction. Together with his brother Carl, he emigrated to Butler County, Pennsylvania in 1831, where the siblings had purchased some land and founded a German settlement called Saxonburg. He married and began farming, but found working the land tedious and unsatisfying. In 1837, Roebling returned to his engineering profession. He first worked on projects to improve river navigation and build canals, which were vital in transporting goods across the country.

“The study of suspension bridges formed for the last few years of my residence in Europe my favourite occupation … Let but a single bridge of the kind be put up in Philadelphia, exhibiting all the beautiful forms of the system to full advantage, and it needs no prophecy to foretell the effect which the novel and useful features will produce upon the intelligent minds of the Americans.”   J.A. Roebling to Charles Ellet, Jr.

In 1840 he wrote to suspension bridge designer Charles Ellet, Jr., and offered to help with the design of a bridge near Philadelphia. The following year, he began producing wire rope at Saxonburg in 1841. At that time, the canal boats from Philadelphia were transported over the Allegheny Mountains on railroad cars, so that the boats could continue their journey on the waterways to Pittsburgh. The system of inclines and levels that moved the boats and conventional railroad cars was a state-owned enterprise, called the Allegheny Portage Railroad. The railroad cars were pulled up and down the inclines by a long loop of thick hemp rope. The hemp ropes were not only expensive, but also had to be replaced frequently as the fibres frayed. Roebling remembered an article he had read about wire ropes. Soon after, he started developing a 7-strand wire rope at a ropewalk that he built on his farm.

In 1844, Roebling won a bid to replace the wooden canal aqueduct across the Allegheny River with the Allegheny Aqueduct. His design encompassed seven spans of 163 feet (50 m), each consisting of a wooden trunk to hold the water, supported by a continuous cable made of many parallel wires, wrapped tightly together, on each side of the trunk. In 1845, he used this design as a model for building a suspension bridge over the Monongahela River at Pittsburgh. Several more suspension aqueducts followed.

After moving to Trenton, New Jersey, he founded his company for wire production: John A. Roebling’s Sons Company. It was there, in 1867, that he started the design work on what is today called Brooklyn Bridge. Unfortunately, he never saw his work completed nor official construction commence in 1870. On June 28, 1869 at Fulton Ferry, while he was standing at the edge of a dock, working on fixing the location where the bridge would be built, his foot was crushed by an arriving ferry. His injured toes were amputated. He refused further medical treatment and wanted to cure his foot by “water therapy“, i.e., the continuous pouring of water over the wound, which was believed to keep it clean and promote healing. His condition quickly deteriorated, and he died on July 22, 1869 of tetanus at the home of his son on Hicks Street, in Brooklyn Heights. Roebling is buried in the Riverview Cemetery in Trenton, New Jersey.