The Treue Der Union (Loyalty to the Union) Monument memorializes the death of 36 German men and boys in the Nueces Massacre. In 1862, dozens of Germans camped along the banks of the Nueces River hoping to cross the border into Mexico. These men opposed slavery and refused to fight for the Confederacy. Confederate soldiers pursued the deserters, killing 19 Germans and injuring another 15. Nine of the wounded were taken outside the camp and executed. A week later, eight more were executed when caught trying to cross the Rio Grande. Paralyzed with fear, many Germans stayed in the Hill Country. Some managed to escape north or to Mexico. The obelisk is the oldest Civil War memorial in Texas, and the state’s only Union monument. The Treue Der Union Monument is a State Antiquities Landmark and is listed in the National Register.

A list of the commemorated victims can be found here. 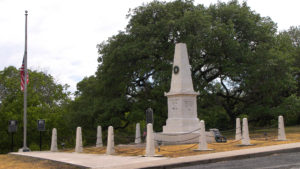