Originally founded in 1858 to serve the city's growing German population, it is noted for its historic parish church at the corner of New Jersey and Vermont streets, which was completed in 1912. Designed by architect Hermann J. Gaul in the late Gothic Revival style, it follows a cruciform plan modeled after the Cologne Cathedral in Germany. The church is listed on the National Register of Historic Places.

In 1856 Reverend Peter Leonard Brandt arrived from Vincennes, Indiana, to establish a German-speaking parish for the German Catholics of Indianapolis.

After the turn of the century, when the neighborhood become commercial, the parish purchased property at New Jersey and Vermont streets, where they built the present church, which was under construction from 1910 to 1912. St. Mary's has adapted to its changing ethnic neighborhood over the years. In 1967, as the city's Spanish-speaking community began to grow, the parish began offering Sunday mass in Spanish. German-language services have since been discontinued.

Architect Hermann J. Gaul, a native of Cologne, and an admirer of the Cologne Cathedral, designed the church in the late Gothic Revival style. St. Mary's follows a cruciform plan with a narthex and semi-octagonal apse. Its walls are dressed in stone. 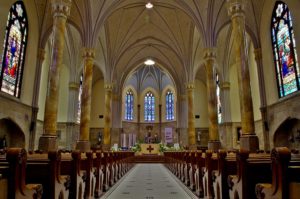