"The park opened on June 12, 1870. At its zenith, the park consisted of an Inn, music pavilion, dance hall, shooting range, refreshment stands, roller coaster, bowling alleys and a zoo. Many organizations are associated with Schuetzen Park, however, the best known of these is the Davenport Turngemeinde. Many Turngemeinde members were also members of the Schuetzengesellschaft and the Turners also had an athletic field at the park for their outdoor track events. A monument in commemoration of the 150th anniversary of the Davenport Turngemeinde (2002) can be seen in the park.

The park flourished until the outbreak of World War I, when anti-German sentiment rose in Davenport and across the country. The German language was outlawed, German books were removed from the library, citizens of German birth were interrogated about their loyalty to the United States, many German businesses changed their names, the Schuetzenverein was renamed the Davenport Shooting Association and Schuetzenpark was for a time renamed Forest Park. In 1923 the park was sold to the Chiropractic Psychopathic Sanitarium for $3,500.
In 1995 restoration efforts began of the grounds and once again cultural events and other activities take place there. The park has acres of nature trails, a deer pond, Bavarian Wayside Shrine and the granite remains of the German Savings Bank. In 2005 a new picnic pavilion was erected and in 2008 a new bandstand was constructed. As in years past, a summer concert series is traditionally held in the park and a wide range of musical styles are presented." 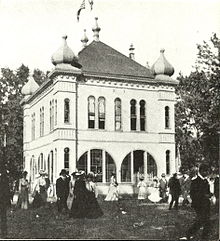