Now a suburb of Chicago, Schaumburg was named by German immigrants who arrived in the mid-19th century. The first recorded settler of Schaumburg Township was German-born Johann Sunderlage who was a member of an 1833 survey team. Many of the Germans came from Schaumburg-Lippe, a small principality now in Lower Saxony, and the village was soon given the name Schaumburg after a wealthy landowner, Friedrich Heinrich Nerge, slammed his fist on the table during an 1850 township meeting and proclaimed loudly in his native German dialect: "Schaumburg schall et heiten!" (It shall be called Schaumburg!)

By 1870, Schaumburg Township had become completely German. Land records show that most of the property in the township was owned by German immigrants or their descendants. As American-born settlers moved west, the land they owned in Schaumburg was then purchased by German-born immigrants.

Schaumburg Township remained almost exclusively under German ownership until the Great Depression of the 1930s. The Depression caused the foreclosure on some German-owned farms, which were then purchased by non-German individuals and companies. Nonetheless, German heritage remained important in the area. German was the first language of the majority of households until the 1950s.

Historic Landmarks and sights nearby include: 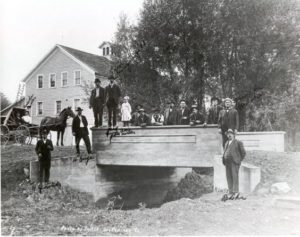