This beautiful brick building was once the home of a thriving German Turnverein, a gymnastics society.

"At the turn of the twentieth century, Indianapolis’s German-American community hired architects Vonnegut & Bohn to create a clubhouse where they could practice the “sound bodies and sound mind” principles of Friedrich Jahn, who believed physical exercise and cultural activities led to a healthy life. The firm led by Bernard Vonnegut and Arthur Bohn, both sons of athletic and German immigrants, had already designed Das Deutsche Haus (later known as The Athenaeum), a downtown turnverein.

Built in 1900 at 306 Prospect Street, the red brick building contained a gym bordered by a proscenium stage usable for athletics and suitable for performances and social gatherings, with a bowling alley and pub on the level below. The firm recruited Austrian Rudolf Schwarz, who had created the limestone sculptural groups for the Soldiers’ and Sailors’ Monument, to produce an allegorical sculpture group for the west gable." 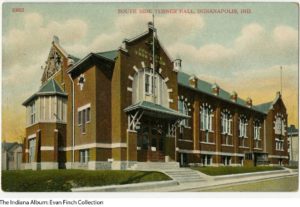