The Lincoln Bank Tower in Fort Wayne, Indiana, United States, is an Art Deco high rise building. It was built in 1929 and opened in 1930. For decades, it was the tallest building in the state. The building was also known as "Lincoln Bank Tower" to distinguish it from the building at 215 Berry Street, which had been known as the "Lincoln Life Building" from 1912 until 1923. 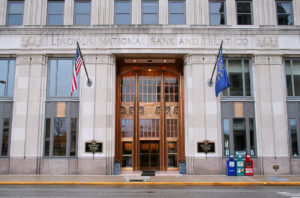