In the early 19th Century, German immigrants landing in Boston faced the challenge of adapting to a new social environment, while striving to preserve their unique cultural and religious heritage. Foremost among their concerns was the fear that a rapid assimilation into American society would result in a loss of their cultural identity and even of their Faith.

While Boston’s predominantly Irish pastors tried to be responsive to the needs of their German Catholic flock, none of them spoke German, and so they could neither preach nor hear confessions in the immigrants’ native tongue. They were also unfamiliar with German religious traditions including age-old customs that revolved around important religious holy days. For example, Germans traditionally put a high priority on the celebration of Christmas. In fact, it was German immigrants in Boston who introduced the use of Christmas trees and greeting cards to New England. They also celebrated Easter in a unique way by participating in a wake from Good Friday until Easter Sunday at the Holy Grave with a figure of the dead Christ lying in the ground.

Sympathetic to their plight, Bishop Benedict Joseph Fenwick, S.J. (consecrated 2nd Bishop of Boston in 1825) requested secular clergy from Germany. Between 1836-1846 five priests answered the bishop’s call, but they all moved on, wishing to serve where there were larger German Catholic populations in the Midwest.

In interim periods, Rev. John Stephen Raffeiner from the Diocese of New York traveled several times a year to Boston to minister to the German Catholic community. Recognizing the need for a permanent German parish and clergy, Fr. Raffeiner diligently worked for the establishment of a German national parish. Under his leadership, the cornerstone for Holy Trinity (German) Church was laid in June 1842 and with the generous assistance of Bishop Fenwick, the church building was completed and the first mass celebrated in June 1844. 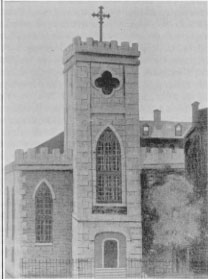