The Germania Club Building, located at 108 W. Germania Place in the Near North Side community area of Chicago, Illinois, is the historic headquarters of the Germania Club, the oldest German-American organization in the city. The Germania Club was founded in 1865 as the Germania Männerchor, which was formed by Otto Lob, who was also the first conductor, to sing at Abraham Lincoln's funeral.

The club built the Germania Club Building in 1889; it was designed by architect August Fiedler in an eclectic style featuring neoclassical and German Renaissance influences. The five-story building has a two-story limestone base with a portico and arched doorway on the south end. The upper stories feature arched windows capped by pediments and a pilaster supporting the cornice atop the building. The building includes a grand ballroom, banquet room, and restaurant and bar. The club played an important role in Chicago's German-American community, once the largest ethnic community in Chicago.

When WWI broke out, the club became the target of anti-German rhetoric and changed its name to the Lincoln Club in 1917. It became the Germania Club in 1928, and evolved from a choral ensemble that collected books and material relating to the German experience in America to an almost purely social club, which developed a reputation as one of the leading private clubs of Chicago. The club disbanded in 1986.

The Germania Club Building was added to the National Register of Historic Places on October 22, 1976. It was designated as a Chicago Landmark on January 13, 2011.

Today, the ballroom can be rented for special events and weddings. 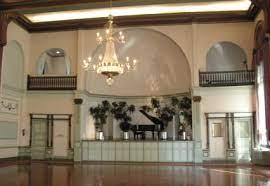 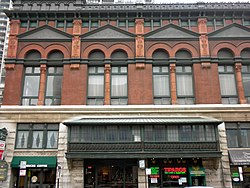