The Follen Church Society dates back to 1835, and the building to 1840. The white, octagon-shaped sanctuary is the oldest standing religious structure in Lexington, Massachusetts. Ground was broken for the building on July 4, 1839, and it was dedicated on January 15, 1840—one day after the tragic death of its designer and first minister, the Reverend Doctor Charles Theodore Christian Follen.

Dr. Charles Follen had trained for the law in his native Germany, but, fleeing political persecution in Europe for his radical organizing, he came to Boston. He was recommended to friends here by the Marquis de Lafayette, among others, and found a post as the first instructor in German at Harvard University. (He was also the first instructor of gymnastics.) Follen was a man whose deeply held spiritual beliefs led him to see action for social justice as essential. He soon began to study for the Unitarian ministry under the wing of the Reverend William Ellery Channing (famous both as a Unitarian theologian, and later as a voice for abolition). 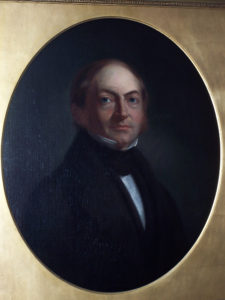