The Fauntleroy Home was built in c. 1815-1820 by the Harmonists. In 1841, the home was sold to Robert Henry Fauntleroy and his wife Jane Dale Owen Fauntleroy. Later, in 1939, the Indiana Federation of Clubs gave the house to the State of Indiana to be preserved as a historic site.

The Harmonists, or Harmony Society, were a Christian theosophy and pietist society founded in Iptingen, Germany, in 1785. Due to religious persecution by the Lutheran Church and the government in Württemberg, the group moved to the United States, where representatives initially purchased land in Butler County, Pennsylvania, and then moved west.

The two photos show the exterior of the house, and an interior shot of the parlor. The house is now a museum. 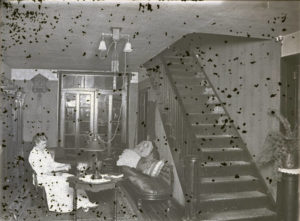