The Dyal–Upchurch Building (also known as the Dyal–Upchurch Investment Company Building) is a six-story, 43,747-square-foot historic building in Jacksonville, Florida. It is located at 4 East Bay Street, and was designed by German-American architect Henry John Klutho. It was built after the Great Fire of Jacksonville in 1901, and was added to the U.S. National Register of Historic Places in 1980. From 1902-1909, it was the tallest building in Jacksonville.

Henry J. Klutho was born in the small town of Breese, IL, in 1873. The son of German immigrants, he began dabbling in architectural study when he moved to St. Louis at age 16. He moved to New York to serve as an apprentice at the city’s architectural firm, and spent time overseas in Europe observing the classical architecture before heading right back to work in New York. 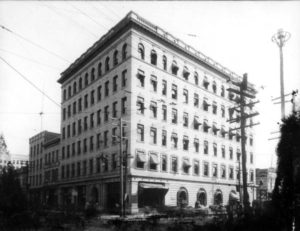