Over the years, City Cemetery became the final resting place for thousands of local citizens including:

Davenport's first mayor. Early German immigrants to the area. 60+ Members of the Davenport Schleswig-Holstein Kampfgenossen von 1848-49-50 and Davenport Kriegerverein. Johann Kaspar Wild, Swiss-German artist. Members of successful families whose last names are still recognized in Davenport today (such as the Beiderbecke family) Some infamous by association (Dr. Michael and Catherine Horony, the father and stepmother of western legend Mary Katherine “Big Nose Kate” Horony). 90% of all headstone in the cemetery are written in German. 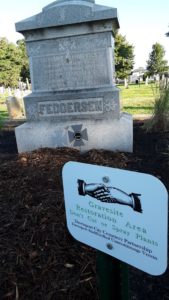