The American Brewery, located in the Broadway East, Baltimore community, is an historic former brewery located at 1701 North Gay Street in northeast Baltimore, Maryland, United States. Formerly abandoned and left to decay for four decades, it has been repaired and restored. It is currently the headquarters of Humanim Inc., a regional social services agency. Built in 1887 by John Frederick Wiessner, a German immigrant, for his Weissner Brewing Company, the Northeast Baltimore brewery was one of the largest breweries in the state of Maryland. At its peak, the brewery employed 61 workers: 16 in brewery work, 17 drivers, 14 in the bottling house, 8 garage men, and 6 office workers. 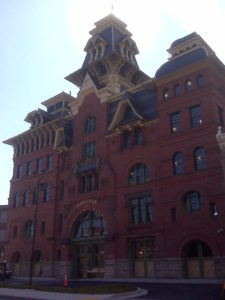