A San Francisco-based clothing company founded by German immigrant Levi Strauss (February 26, 1829 – September 26, 1902) from Buttenheim, Bavaria. In 1847,Strauss along with his mother and two sisters emigrated to the United States to join his brothers Jonas and Louis, who had begun a wholesale dry goods business in New York City called J. Strauss Brother & Co., at 108 Liberty Street in Manhattan. After his arrival, Levi worked as an itinerant peddler of goods from his brother's store, selling kettles, blankets and sewing goods.

As this was the time of the California Gold Rush, the Strauss family decided to open a West Coast branch of their dry goods business in San Francisco, which was the commercial hub of the Gold Rush. Levi was chosen to represent them, and he took a steamship for San Francisco, where he arrived in early March 1854 and joined his sister's family. He started a wholesale business under the name Levi Strauss & Co. and imported fine dry goods from his brothers in New York, including clothing, bedding, combs, purses, and handkerchiefs. He made tents and later jeans while he lived with Fanny's growing family. Jacob W. Davis was one of his customers and one of the inventors of riveted denim pants, and in 1871, he went into business with Strauss to produce blue jeans. The two men patented the new style of work pants in 1873. After his death, his company went to his nephews.

During his life, Levi helped establish Congregation Emanu-El, the first synagogue in the city of San Francisco. He also gave money to several charities, including special funds for orphans, and started The Levi Strauss Foundation with an 1897 donation to the University of California, Berkeley, that provided the funds for 28 scholarships.

The Levi Strauss museum is located in the 1687 house where Strauss was born in Buttenheim, Germany. Today, Levi Strauss and Co. is a global corporation that employs 16,000 people. 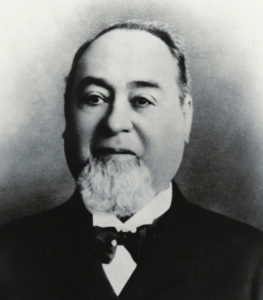 Founded in 1910, in Jasper, Indiana by a group of German-American business leaders. The community's heritage…

The H. J. Heinz Company is an American food processing company headquartered at One PPG Place in Pittsburgh,…

The company was founded in 1904 by Emil Julius Brach, who invested his $1,000 life savings in a storefront…